This recipe and photography were provided courtesy of local cookbook author and chef, Carla Snyder. Learn more about Carla and discover her recipes at Ravenouskitchen.com or in her cookbook, One Pan Whole Family.

I had the most amazing sangria of my life when I lived in Spain as a college student.

The first thing we did on entering the city of Madrid was drop off our bags at our pension and hit a local tapas bar for bites and drinks. Lo and behold, the fabled giant pitchers of fruity red wine sat on the counter. How could we resist? Cold and boozy, it was the perfect drink for slightly dehydrated 20-year-olds and paired brilliantly with the tapas of pulpo (octopus), tortilla Espanola (potato omelet) and gambas (shrimp).

That was about 40 years ago and sangria is still one of the best beverages on the planet. It’s definitely low tech. All you need is a pitcher and a wooden spoon to make sangria happen. Oh, and fruit, red wine and brandy. It only takes a few minutes to pull a pitcher together, but sangria likes to sit a few hours so the flavors can really bloom. I usually make it in the morning, give it a chill afternoon and serve it that night.

I thought a nice fall sangria would help to mitigate the despair of heading into the winter months. Quite honestly, sangria goes a long way towards making a day brighter, and with less and less daylight going into fall, we could all use some sangria-induced brightness. 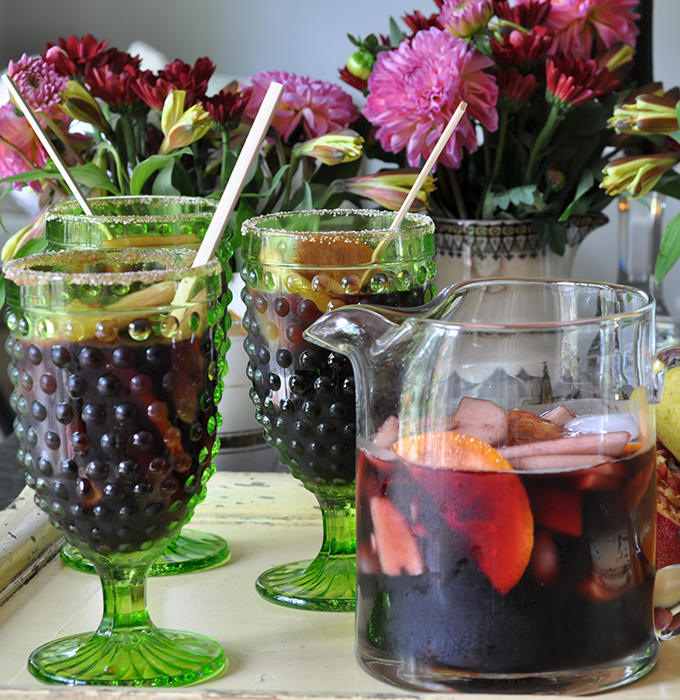 The best wines for sangria tend to be bold, fruity, Spanish wines like Rioja, Tempranillo or Garnacha. I make it a point to choose less expensive wines for sangria since they will be altered so much with the addition of fruit and brandy. Sangria is a bit of a waste of fine wine, so try to find something under $10. You will be amazed at the transformation.

Brandy is the booze of choice in sangria, but you could use a flavored brandy such as Calvados (apple flavored), Poire William (pear flavored) or even cinnamon-flavored whiskey like Fireball. It gives sangria its punch as you are watering down the wine with the cider and fruit. The brandy gives this sangria fuerza or strength. You’ll be glad you added it.

Most sangria recipes include a little sweetener. With all of the apple, orange and pear,  it seemed to me that a little bit of cinnamon would be nice as well. The best way I know to inject a good cinnamon flavor is to steep cinnamon sticks in hot simple syrup. Sweet and cinnamony, it’s a twofer of spice and sweet. If you want to go for it, a rim of cinnamon sugar isn’t a bad idea either. Just mix up cinnamon sugar as you do for toast, pour it on a plate, rub a slice of orange around the rim of the glass and dip it into the sugar. On second thought, this idea is a must-do. I also like to skewer some of the fruit on a stick and add it to the glass for easy nibbling. The sangria-soaked fruit is SO good.

This easy 9-ingredient sangria has got everything a great sangria needs; it’s fruity, lush, smooth, refreshing, not too sweet, boozy and as refreshing as a splash in the face; only you don’t get wet, just refreshed. 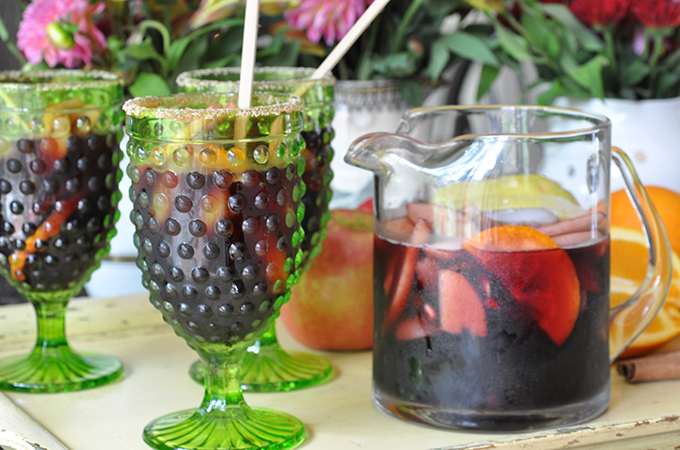 Click Here to Print the Recipe for Fall Harvest Sangria.

Make-ahead: I think this sangria is best made the morning of the day you want to serve it.

Tips for Cutting a Pomegranate: It’s simple to remove the seeds from a pomegranate. Just cut it around its equator, holding one half over a bowl, cut side down, rap it with the handle of a wooden spoon. The seeds should pop out nicely. Discard the shell and use the seeds as directed.