Skip to main content
Home > Stories > What is the Best Way to Prepare Oysters?

What is the Best Way to Prepare Oysters?

The information, recipe and photography in this post were provided courtesy of local cookbook author and chef, Carla Snyder. Learn more about Carla and discover her recipes at Ravenouskitchen.com or in her cookbook, One Pan Whole Family.

The simple oyster makes any affair a celebration, but oysters are adaptable and delicious not only raw but grilled, baked, gratin, souped-up and tossed into holiday stuffings as well. If the world is our oyster, we should definitely shuck those babies open and enjoy them. But first, a little information about these amazing mollusks is in order.

How Many Kinds of Oysters Exist?

There are as many as 150 different kinds of oysters all springing from 5 species. To put it in simple terms, the basic 5 species are Pacific oysters, Kumamoto oysters, Atlantic oysters, European flats and Olympia oysters.

Although most American oysters are the same species, they have different flavors. Because oysters filter so much water, they develop a flavor profile from their environment. Different bodies of water have varying levels of salt and different kinds of nutrients. Atlantic oysters tend to be brinier and larger than Pacific oysters while Pacific oysters are creamier and sweeter. Kumamotos are a favorite raw oyster as they tend to be smaller.

Are the Oysters We Eat Wild or Farmed?

Oysters are actually a sustainably farmed food source. It turns out that they are filter feeders that eat algae and nutrients already in the water, improving the quality of the water. Unlike fish farming, oysters do not generate waste or pollute the water, even in densely packed beds. On the contrary, they remove nitrogen from the water and improve water clarity, which benefits other aquatic plants and wildlife. Oysters grow naturally in estuaries of brackish water. When farmed, the temperature and salinity of the water are controlled or monitored to encourage spawning and fertilization, as well as to speed the rate of maturation – which can take 2 to 3 years. Up to 95% of the oysters we eat are farmed, so oyster farming is a good thing because it means we get to eat perfectly delicious, sweet and lovely oysters conscience-free. 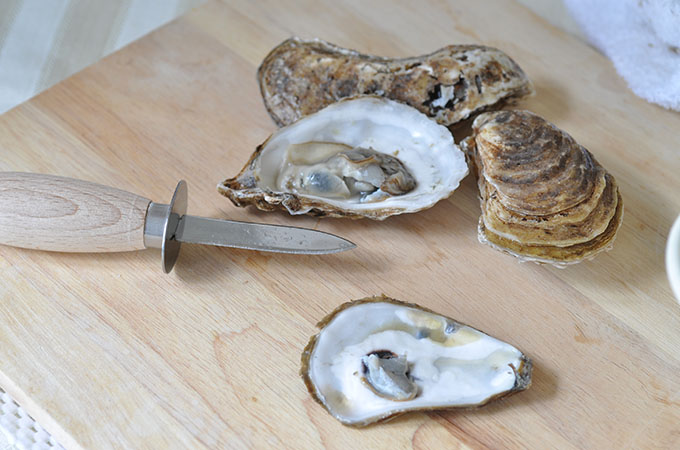 Are Oysters Good for You?

Not only are oysters good for the environment but they are an excellent source of essential nutrients including. Most oysters contain 16 grams of protein per 170 g serving, vitamins A, E, B-12 and C, zinc, iron, calcium and selenium. A study done by the University of Washington found that eating oysters can help raise the HDLs (good cholesterol levels) and lower the LDL’s (bad cholesterol levels) while also boosting antioxidants, omega-3 fatty acids and water. Ready for an oyster yet?

When is Oyster Season?

Any season is a good season to eat oysters. The old advice was to only eat oysters in the eight months of the year containing an “R” meaning the months of May through August were a no-go as they are spawning months. The meat from oysters during those summer months will be a little blander, softer and creamier. The way to work around this is to eat oysters from cooler waters during the summer months so, look for oysters from the colder waters of New England or Canada during in the summer.

How Long Do Oysters Stay Fresh?

Oysters are best eaten as soon as you buy them, but they are easy to store for up to 2 days if you’re not eating them right away. Make sure the oysters are positioned cup-side-down so that the liquor doesn’t drain from the shells. Lay a damp towel over them and keep refrigerated. Never enclose them in plastic or in freshwater as they will suffocate.

Are Oysters Difficult to Prepare?

The only complicated part about eating an oyster is getting it open. It takes a special tool called an oyster knife, a firm grip and a little fooling around to get acquainted with the shape and physiognomy of the oyster before you become an expert. If you need help, the people behind the seafood counter have you covered and will happily shuck your oysters for you. With a little effort you can certainly do it yourself. Just follow the tutorial below for step-by-step instructions. If you are making oyster chowder and don’t need oysters on the half-shell, there’s also oysters sold in refrigerated plastic tubs, already shucked and ready to go for soups, stews, gratins and stuffings. 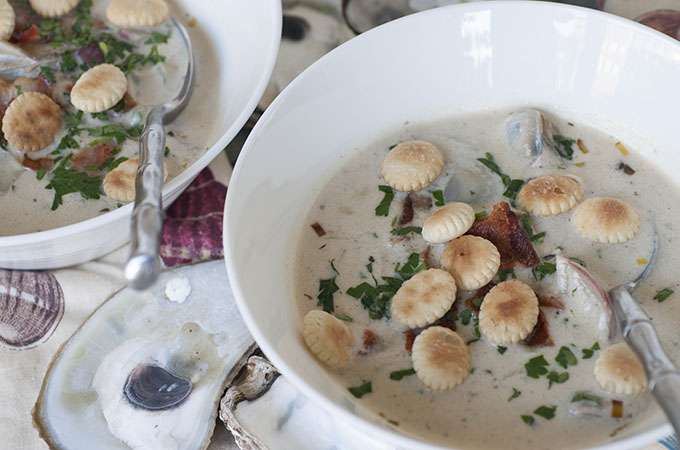 What is the Best Ways to Prepare an Oyster?

Fresh from the sea, these hard-shelled wonders taste like heaven. Savoring a fresh whole oyster is bliss and I love them with only a squeeze of lemon, but mignonette sauce takes them to another level. This sauce is made of shallot, white vinegar, salt, pepper and a touch of honey. It’s super simple and once you’ve tried it you’ll want a little bowl to go with your oysters every time. I’ve frozen basic mignonette into a concoction called a granita which turns the sauce into a shaved ice type of texture. I love how it is so icy cold, chilling the oyster even more.

The most famous oyster dish in the U.S just might be Oysters Rockefeller. Created in New Orleans at world-renowned Antoine’s, this dish includes a cheesy sauce with green onion, garlic, butter, kale and a crunchy crumb topping that makes grown men cry. No wonder they named it Rockefeller as this dish is as rich as rich gets. 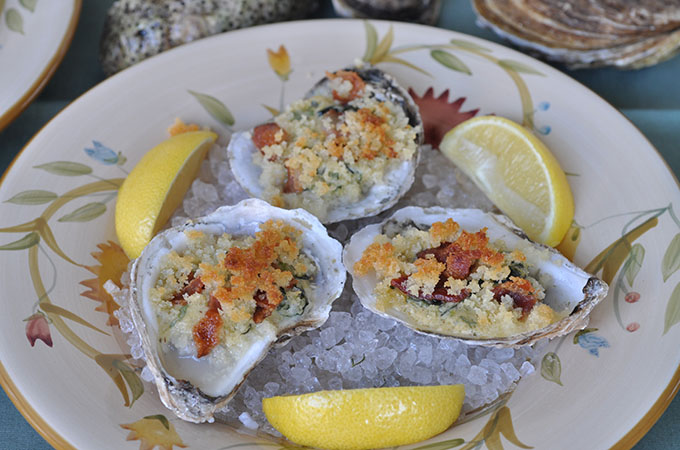 Oyster Chowder is one of my favorite dishes when the weather turns cold. Easy and quick, this creamy bowlful satisfies and soothes a blustery day away. I suggest leeks in this soup as they are an indulgence and the smoky bacon and silky potatoes make it a meal. All this bowl needs is a handful of oyster crackers to take it to the next level.

So, get shuckin’. The holidays are a perfect time to serve up oysters and with a little practice, by the time Christmas rolls around you’ll be shuckin’ oysters like a pro.

How to Shuck an Oyster Raw 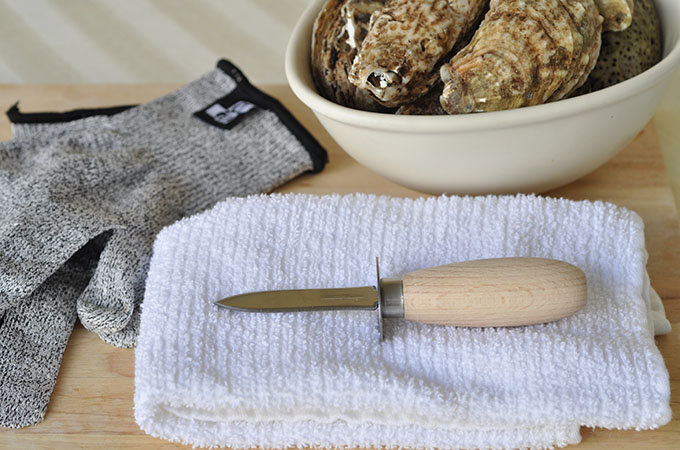 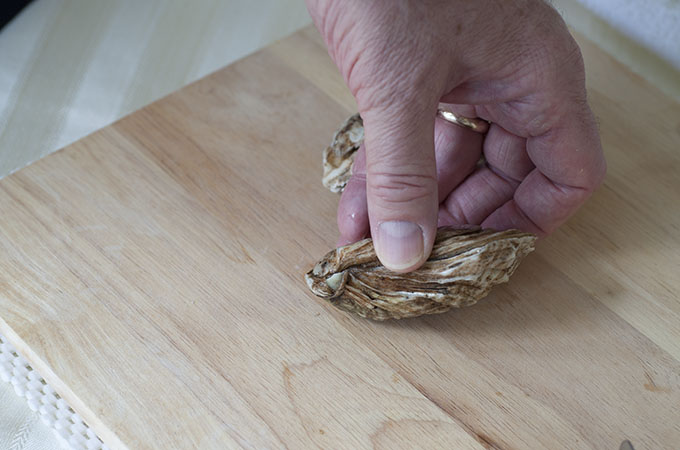 Step 1: Oysters can be intimidating to open since they have no obvious point of entry. I think the hinge is the best place to start. You’ll want an oyster knife, a short-bladed knife with a short easy-to-grip handle and a thick towel. You can also use special gloves to protect your hands,  but if you’re careful you’ll be fine.

Step 2: Lay a damp towel under the board to keep it from moving while you work. Place the oyster, cup-side- down on the cutting board and lay the towel under and over the top of the oyster, leaving the hinged side open. With your other hand pressing down on the oyster shell to stabilize it, insert the point of the knife into the hinge. 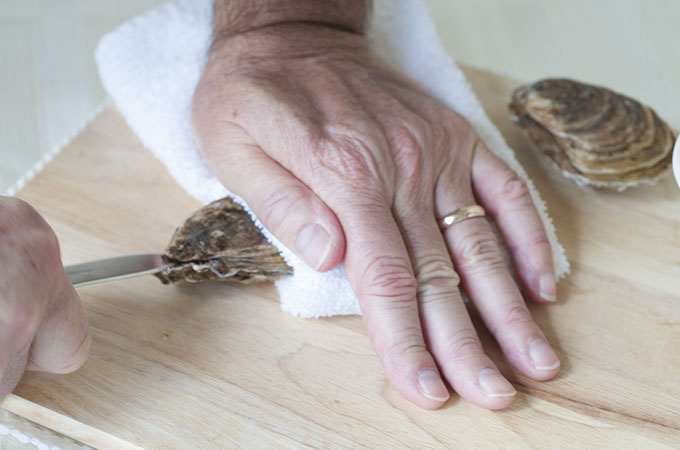 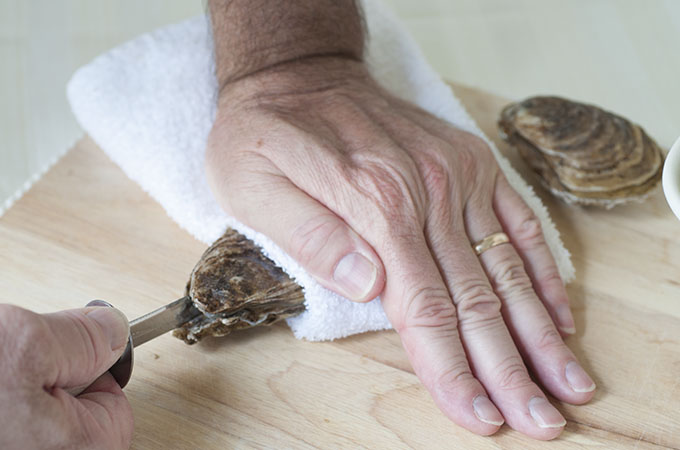 Step 3:Wiggle it around until you find the sweet spot, twisting the knife. Once it is inserted, give the knife a twist to pop the hinge.

Step 4: With your hand still on top of the shell, run the knife around the right side of the shell to cut the muscle which attaches the oyster to the shell and further pry the top shell from the bottom. 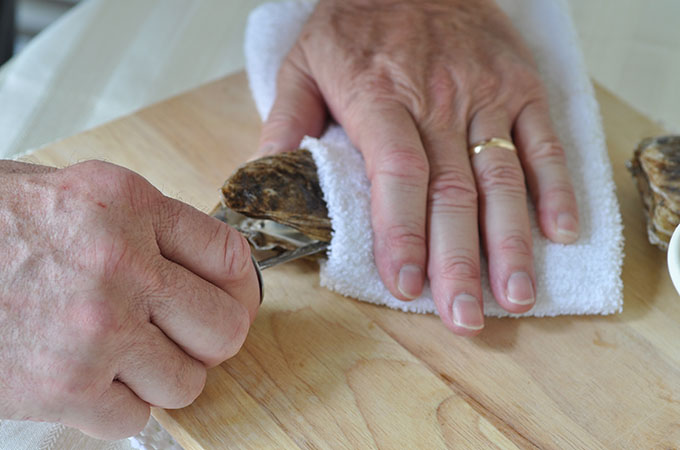 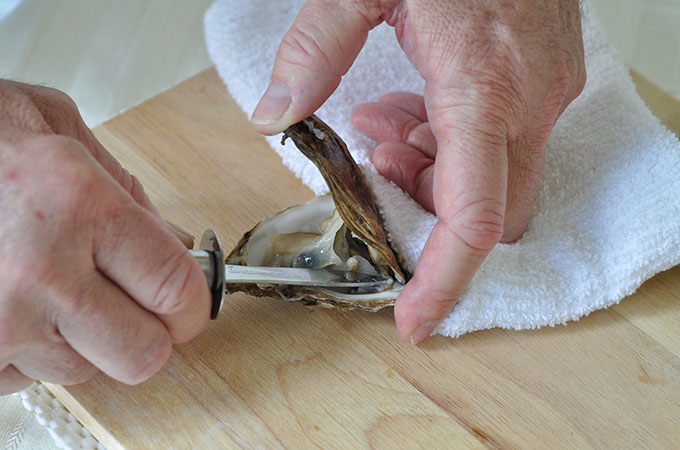 Step 5: Wipe the knife clean on the towel. If the muscle hasn’t been severed, cut it away with the knife.

Step 6: Now you have an oyster on the half shell, it is ready to be eaten raw.

How to Shuck an Oyster with Heat

Step 2: Lay the oysters on a sheet pan or grill, cup side down. If you have a cooling rack that fits inside the pan, it will help to keep the oysters from tipping and spilling their liquor. You can also use a bed of kosher salt to help stabilize them.

Step 3: Bake or grill the oysters till they open. Some may take longer than others, around 8 to 10 minutes depending on size.

Step 4: Remove them with tongs as they open and carefully transfer them to another sheet pan to cool. Discard any oysters that do not open as they are dead. Pry open the shells and cut the oyster muscle attaching it to the shell. Enjoy the oysters as you wish.