If you’re like me and spend the majority of your free time eating or watching Netflix, there is good news! You no longer need to choose between your love of food and love of streaming ⁠— there are many fantastic shows that will satisfy TV and food junkies alike. These shows star some of our favorite actors that we all grew up with such as dessert, cheese and wine. It may be easy to make these stars glow, but foodie shows are still putting their own unique spin on them and ensuring that they are shown off in a refreshing way that is worth checking out.

Despite all five of these shows talking about my favorite subject (or rather, everyone’s favorite subject), they still exist in their own spaces that are separate from all other cooking shows. These shows stress the importance of many things like food origins, growing processes and the communal importance of sharing a meal. Maybe you’ll binge all of these shows in a week or maybe you’ll savor them like a 1989 Chardonnay. Either way, you and your foodie friends will be in for a treat.

There’s a reason Salt, Fat, Acid, Heat was described as being “unlike any other show on TV” by The Washington Post. The descriptor is true and yet, still does not give this ode to culinary wonder enough credit for its originality and warmth. Part of that warmth comes from the host, Samin Nosrat, and her love of finding out where food comes from, how it’s made and who makes it. 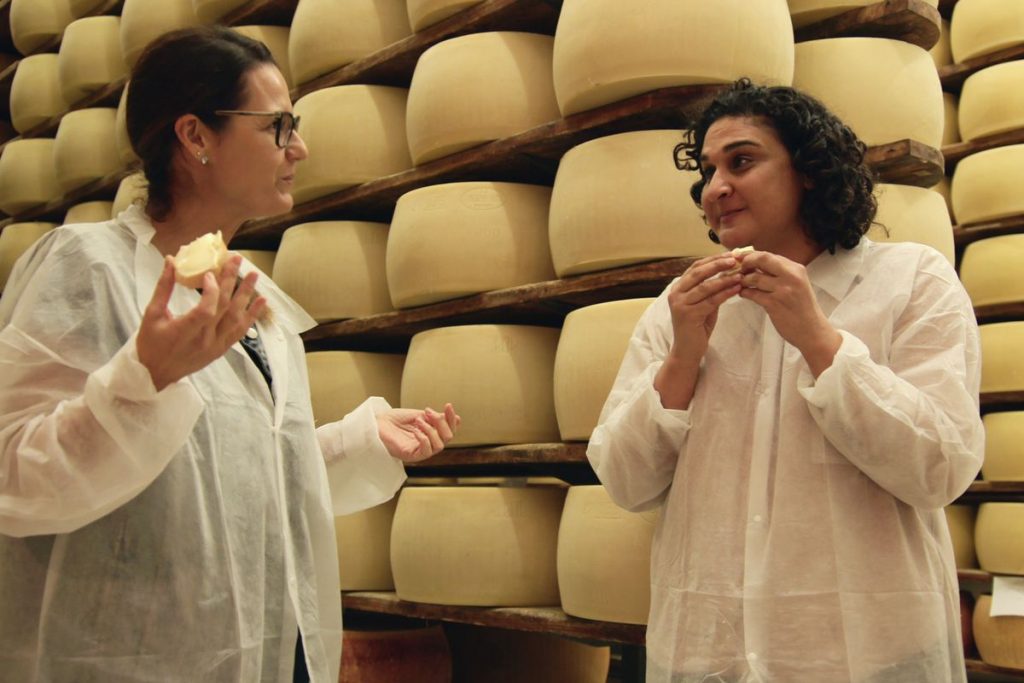 Photo: The true stars of Salt Fat Acid Heat. Oh, and the people in the front are pretty great too.

Another part of the show’s charm comes from it being different than any other “pulling back the curtain” type of program. Instead of talking about one location or chef, Samin spends time traveling the world and talking about why salt, fat, acid and heat are the most essential ingredients in any dish.  In this quasi-investigative way, she has rebranded what a food documentary can be by focusing on something that has never been central in television before. These components of food are all critical parts of each of our favorite dishes. Samin realizes this and visits Italy, Japan, Mexico and California in order to find growers who understand the allure of these ingredients.

Episode to Watch: The episode is called “Fat” and talks about cheese. Need I say more? Fine.

Samin travels to Italy to meet with the makers of Parmesan cheese, one of the most timeless staples of the Italian countryside and something that has found an audience (almost) as passionate in America. It’s amazing to witness the specificity that goes into the creation of just one kind of cheese. In between milk and the finished product are many years of carefully monitored temperatures, processes and techniques, and it’s a joy to watch. 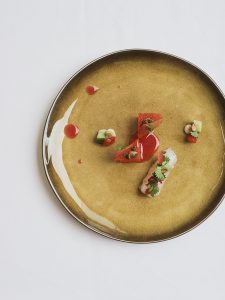 On the Hiša Franko menu: Watermelon, Pimpinella, Cucumber and Langoustine from the Kvarner Gulf.

If Salt, Fat, Acid, Heat is a casual home-cooked meal, Chef’s Table is the fancy Valentine’s Day Dinner out that you look forward to all year.

The entire show vibrates with poise and sophistication, and the chefs at the center of each episode exude a level of confidence in their craft that is rare to find on television.

One of the most important aspects of the show that makes it fundamentally brilliant is the cinematography of the food on display. Every dish that comes across the screen is glowing with vibrant colors and textures. During each episode, I found myself googling the exact location of these restaurants around the world and adding them to my bucket list. If there has ever been a cooking show that will inspire you to globe-trot for good eats, it will surely be this one.

The chefs that are interviewed in each episode range from legacy gastronomists with roots in the kitchen to amateurs who dealt with trauma before beginning a career in cuisine. This style of documentary filmmaking has worked so well that there is even a French version. Sure, you may need subtitles, but you get to see more gorgeous food and wine videos on display. Is that really such a bad trade?

Episode to Watch: What do you know about Slovenian food? If you’re like me, the answer is absolutely nothing, which is one of the reasons the episode on Ana Roš was so appealing. A Michelin-Star-Winning chef, Ana Roš is given her own episode in the third season of the show, and it is a fantastic watch that highlights the importance of linking food to the surrounding environments. Despite knowing that a seat at Ana’s restaurant, Hiša Franko, would cost me over $200, I still found myself looking up flight options to get to Slovenia as quickly as possible. When produce looks as good as it does at this restaurant, sometimes it’s alright to splurge.

Have you ever wondered what goes into the process of evaluating wine? I’ve often found myself asking, “How hard is it to really just tell if a wine is good or not? And isn’t that completely subjective?” Part of the answer is yes, the making and tasting of wine is incredibly subjective. The other part of the answer, however, is no. Knowing how to evaluate wine by its vintage, smell, taste and country of origin are things most people cannot do, but do serve as an important marker of “wine intelligence” for people in the business. For a sommelier, these are necessary skills that make them experts in wine. 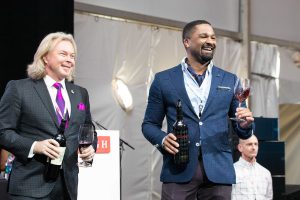 In order to become an expert in this area, enthusiasts must pass the Master Sommelier examination. SOMM follows a group of people that are preparing to take this test: a grueling quiz of wine expertise that has three main parts; a theory examination, a practical service test, and an incredibly difficult tasting of six different wines. The documentary shadows these “maybe, maybe not sommeliers” who have waited many years to take the exam, and shows the highs and lows that come with such massive preparation. For some, the exam ends in success and they will be incredibly successful for the rest of their lives. But for others, all the hard work put into passing goes to waste, and they must wait several months before even getting the chance to retake the test. If you’re interested in hearing and seeing wine culture in a new way, this is definitely for you.

Doc Highlight: Despite this being a serious documentary, I couldn’t help but laugh at the randomness of the smelling notes. With such intensity, we watch experts say that wine smells of tennis balls, grass and leather. Although it may be absurd, it’s a great reminder that even the people who can pick up those bizarre smelling notes in wine are taking a test so difficult that they rarely pass. And I thought the SAT was impossible!

The celebrity interview format has frequently changed over the last few years. If you’re someone like me, watching interviews of two people sitting down isn’t that exciting, no matter what they’re saying. But when food is added in the mix, well, now we’re talking. The Chef Show with Jon Favreau is an avant-garde kind of “talk show” that focuses on food just as much as it focuses on guests.

Further, there is an endearingly laid back atmosphere that surrounds Jon and Roy Choi, Jon’s sidekick who is a renowned restaurateur and chef.  While Roy is cooking in the kitchen and teaching his co-host and guests about the food being cooked, Jon is getting to know the guests, learning more about what inspires them in and out of the kitchen. For example, in an interview with Gwyneth Paltrow a “Pepper Pot” is crafted out of respect for Paltrow’s gluten-free lifestyle and her famous character in the Marvel universe. The green hued fresh vegetables become the base for the soup-like dish as tender potatoes satisfyingly float down the middle. The dichotomy between the hosts’ lax attitudes and the top-tier food being prepared makes for an audaciously off-beat show that somehow works.

Episode to Watch: In the same episode as the aforementioned Gwyneth Paltrow interview, there is a segment with Bill Burr that is simply heaven for all sandwich enthusiasts out there (again, isn’t that everyone?). The comedian makes Cuban Sandwiches with the hosts, and it’s hard to hear what they’re even saying when such tasty looking pork, cheese and bread hits the eyes at once. Sure, you may end up splurging on a Panini press immediately after the episode ends, but is that really such a bad thing?

Before beginning her television show 30 Minute Meals back in 2001, Rachael Ray was levied with some criticisms in regard to her limited experience in the food industry. Many of these critiques were silenced once she became the Easy Meal Queen across America. No matter how many shows highlight the complex world of food, some just want the goods in a matter of moments, and that’s not a bad thing. 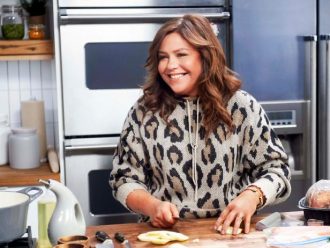 Rachael Ray understood that from the start, and it explains why she became a household name in a matter of a few years. Her show focuses on making cooking easy, and almost nothing is prepared ahead of time. Recipes range from vegetarian options like quinoa salad to hearty classics like buffalo chicken. Despite being cancelled in 2012, the show was recently brought back, and for good reason. Everyone wants an easy meal from time to time, and the show’s format leads to that being achieved with clear instruction, simple ingredients, and a charming host to walk amateurs through the steps.

Episode Highlight: With over 28 seasons of easy meals, everyone will be able to find a new favorite dish with ease. Anyone with a cable subscription can view every single episode of the series online, so planning out weekly meals has never been more accessible or visual.

This blog was written by Nathan Statt, a Heinen’s associate and TV Junkie