How to Cook Lobster 3 Ways

The information and photography in this post were provided courtesy of local cookbook author and chef, Carla Snyder. Learn more about Carla and discover her recipes at Ravenouskitchen.com or in her cookbook, One Pan Whole Family.

Most consider lobster to be one of the most luxurious foods and a sign of a special event. When lobster is in the dish it’s sure to be delicious, and when eating lobster out at a restaurant, it’s sure to be expensive. Did you know that you can easily prepare and enjoy lobster at home for a fraction of the cost of eating it in a restaurant?

Lobster is thought to be pretty fancy, but if you think about it, it isn’t fancy in regions where lobsters are plentiful, like up in Maine, where lobster shows up on an everyday hot dog bun for a lobster roll, in mac and cheese and just simply grilled with herb butter. What do those Mainers know about eating these tasty crustaceans that we do not? I think a few lobster facts are in order. 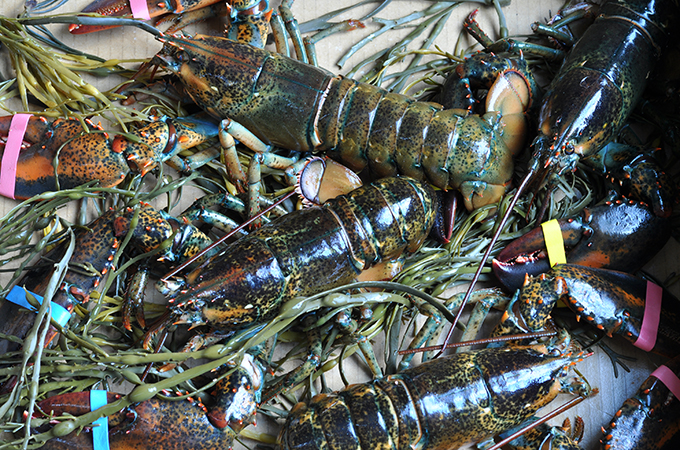 What is a Lobster?

Lobsters are in the same group of species as insects, crabs and shrimp. They have a hard outer shell called an exoskeleton, but do not have an inner skeleton or bones like a mammal. Another interesting fact is that neither insects or lobsters have a brain, so they lack the neural anatomy to feel pain.

How To Store Live Lobsters

Lobsters must be alive when you cook them, so it’s important to store lobsters properly to keep them healthy. The two most important things for lobsters are temperature and moisture, so it’s best to cook lobsters the day you buy them. If you have to keep them a few hours or so, put them in a box with some of the seaweed and place it in the fridge. You can also soak newspaper and lay it on top of them for added moisture. Do not lay ice on top of them as they are saltwater creatures and freshwater kills them. Likewise, don’t put them in the bathtub with fresh water.

Lobsters should be lively and, even if very cold, their legs should be moving. If you have a lobster that isn’t moving, lay it on its back for a couple of minutes to see if it starts to move. If no movement happens it’s probably dead and should not be cooked and consumed.

Can Lobsters Feel Pain When Cooked?

Many are squeamish about cooking a live animal, but remember, they lack the neural anatomy to feel pain. If you are still concerned, it’s easy to put the lobster to sleep before cooking by placing them in the freezer for about 20 minutes. This process allows the lobster to be unconscious or to stun it before cooking, so there is no possible way it will feel any pain. One of the biggest fallacies about cooking lobster is that they scream when dropped into boiling water. It is impossible for a lobster to scream since they have no vocal cords, lungs or throat. The noise that may or may not happen is caused by air trapped in the shell so it’s really nothing to worry about.

What is the Best Way to Cook a Lobster?

As it turns out, cooking lobster is as easy as boiling water. Steaming and boiling are the two most common ways to cook lobster, but grilling is also a great way to cook the tail meat. Lobsters are relatively easy to cook and super easy when you have an instant-read thermometer. Just look for an internal temperature of 145°F. Did you know that in the winter, lobsters have a harder shell and require a bit more time to cook than in the summer? It’s always better to undercook than overcook lobster since overcooking makes them tough. Remember, they will continue to cook for a minute or so when removed from the heat. If the lobster is a tad underdone, you can always add it back to the boiling water for a minute. Whether boiling or steaming, you will need a large pot to cook lobsters. It takes about 3 qts. of water to boil one lobster, as they must be completely submerged. The bigger the pot, the better.

What Pairs Well with Lobster?

Because lobster is such a special meal, you really don’t need to serve them with anything fancy. A simple salad, a bottle of wine and a nice loaf of French bread are the perfect accompaniments. I’ve supplied you with three methods of cooking these crustaceans.

How to Boil a Lobster

Boiling is the easiest technique, plus by salting the cooking water, it flavors the meat. Just add 1/4 cup salt for each gallon of water and allow 3 qts. of water for every 1 1/2 lbs. of lobster. Remember that the lobster must be completely submerged in the water. When the water reaches a rolling boil, add the lobsters to the pot, claws down. Do not cover. The lobsters will turn bright red when they are done. A 1 1/4 lb. lobster should be done in about 11 minutes, a 2 lb. lobster will take about 16 minutes and a 3 lb. lobster will take about 24 minutes to cook. Cook to an internal temperature of 145°F. When finished, I like to stop the cooking by plunging the cooked lobsters in a sink of ice water and letting them sit for a few minutes until cool enough to handle. If you’re going to eat them right away, let them sit out of the cooking water for about 5 minutes so you can handle them, but remember, they will still be hot. Twist off the tails and claws and see below for instructions on how to get the meat from the shell.

How to Steam a Lobster

The benefit of steaming lobsters is that you don’t have to wait for a large pot of water to come to a boil. The steam actually cooks the lobsters faster than boiling water. Just fill a large pot with about 2 inches of water and a few tablespoons salt and bring to a boil. You can also add the seaweed if you have it. When the water boils, add the lobsters, claws down, cover with a lid and adjust the heat so that it continues to boil. Don’t pack the pot with the lobsters as they need some space to steam properly. Steam lobsters for 9 minutes for the first pound, and add 4 minutes for each additional pound. Cook to an internal temperature of 145°F.

How to Grill a Lobster

Grilled lobster tails are especially delicious with herb garlic butter. If you love to grill steaks, you will definitely love to grill lobster when having a surf and turf kind of meal, as the steaks and lobster can all be cooked on the grill at one time.

Twist off the tails and using kitchen shears, cut down the center of the top side of the tail. This allows the heat to permeate the meat and also seasons the tail with butter. I press down on the sides to open and separate a little bit and allow the meat to peek through. Then I run a bamboo stick through the tail to keep it from curling. Just twist off the claws and throw the carapace and legs of the lobster away.

I make a garlic butter with 1 minced garlic clove, about 1/4 cup melted butter and a teaspoon or so of minced fresh chives or parsley for color. Heat the grill to medium-high and lay the claws on the grill first since they take longer to cook. I usually give them about 2 minutes before adding the tails, cut-side-down. It will take about 10 minutes to cook 6 oz. tails with the hood down, and about 12 minutes for the claws, turning them about halfway through the cook time. Baste with the butter after turning the tails and save some of the butter for dipping at the table. Cook to an internal temperature of 145°F. 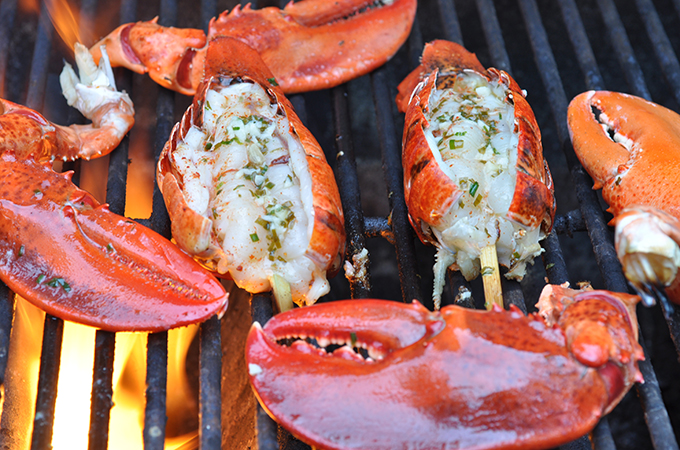 How to Open a Cooked Lobster