Skip to main content
Home > Stories > How to Cook Tuna

How to Cook Tuna

These tips were provided courtesy of local cookbook author and chef, Carla Snyder. Learn more about Carla and discover her recipes at Ravenouskitchen.com.

Tuna is a favorite food for many and this nimble fish covers price points from prized toro sashimi to every day canned “chicken of the sea.”  There’s a chasm between the quality and cost of tuna that goes in, say, a lunchbox tuna salad and the finest sushi in a world-class restaurant, but, at the end of the day they are all tuna fish. Confused? Perhaps a little fishy info is in order.

Top predators, tuna are large oceanic fishes of the genus Thunnus. Because they swim so far and so fast, they contain large amounts of myoglobin (a red pigment that stores oxygen) in their flesh, which is why tuna is often a deep red color. Tuna is the most economically viable fish in the world contributing 42 billion dollars to the global economy each year and they are found in waters all around the globe.

Are there Different Varieties of Tuna?

There are four main types of tuna that you will encounter in the states.

Tuna is good for you. The omega-3 fatty acids found in tuna have been found to support brain health. Tuna is high in vitamin B3 (niacin), which supports heart health; vitamin B12, which is necessary to form red blood cells; and vitamin D, which supports mineral absorption. It’s high in protein and low in fat, making it a great choice for those looking to maintain a healthy weight and it’s even been shown to improve brain activity and mood swings in the elderly.

What Should I Look for When Buying Fresh Tuna?

Most tuna is frozen within a couple hours of being caught. Lucky for us, thawed, fresh frozen tuna holds up to freezing and doesn’t degrade in flavor or texture as much as other fish. So, don’t hesitate to buy frozen tuna from reputable markets. Most often, the tuna in the fresh seafood case will be yellowfin or ahi tuna. The terms sushi or sashimi-grade are not federally mandated terms and so are used loosely as a marketing term for “the freshest fish you can buy.” Unless it’s the most expensive bluefin, most tuna is not graded, so just as when you buy other fish, use your eyes and nose. When buying tuna, look for fish that smells fresh and looks moist, bright and shiny. Store tuna, covered in the fridge and cook it within one or at most two days of purchase for the best flavor.

When buying canned tuna look for the terms “pole and line caught”, “troll caught” or FAD-free which indicates that the fish was caught in a way that minimizes by catch. For the best flavor buy canned tuna packed in oil and choose the darker fleshed light tuna, not albacore, if you’re concerned about mercury.

Is it Safe to Eat Raw Tuna?

A frequent question is, “Is it safe to eat raw fish?” Although all raw fish can contain parasites or microbes that could make you sick, tuna rarely contains parasites. Fish that has been frozen immediately after being caught is the safest as freezing for seven days kills parasites. A good guideline is to be choosy and only purchase fish from sources you trust and if you plan to eat your tuna raw, eat it the day you purchase it.

How do I Store Tuna Once it is Purchased?

Once you have purchased your fresh fish, take extra care in properly transporting and preparing it to reduce the risk of foodborne illnesses. Seafood should be transported on ice and refrigerated or frozen right away, depending on when it will be consumed.

If the fish is frozen, it should be thawed in the refrigerator to prevent it from rising above the danger zone of 40°F. When preparing the fish, keep your work area, tools and hands clean so that your fish is as sanitary as possible before serving.

How Can I Prepare Tuna?

We are all familiar with tuna salad, tuna melts and tuna casseroles, but there are so many interesting ways to cook and eat fresh tuna including a Niçoise salad, tuna burgers, or a poke bowl. It’s important not to overcook tuna as it tastes best when rare in the center, but if you can’t stomach rare-cooked fish, go ahead and cook it fully. It will still taste great, but the texture will be more dense, dry and tough.

There is undeniably popular to eat fresh raw tuna, but it’s also delicious cooked or seared to a medium-rare. Try coating a filet in a sesame crust and sear it in a hot, dry skillet over medium-high heat for about 2 minutes per side. When sliced, you will see about 1/4-inch of cooked fish on the outside and tender raw tuna on the inside. All it needs is a drizzle of soy sauce and an accompaniment of pickled ginger and you’ll be in tuna heaven. 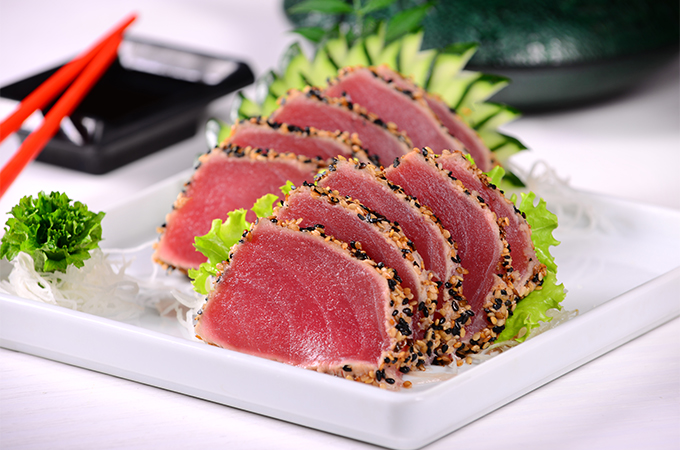 Tuna is also terrific grilled. Brush the tuna with olive oil and grill over high heat for 1 or 2 minutes per side for medium-rare. Serve it over a bed of romaine lettuce with olives, roasted peppers and hard-boiled eggs with a white wine vinaigrette for an easy salad Niçoise. It’s the perfect summer under-the-stars dinner with a glass of rosé. 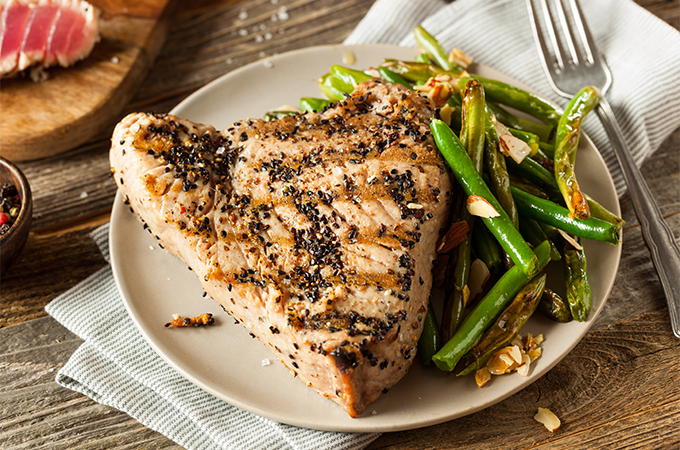 If you want a super easy method, try baking the tuna in a 450°F oven. Just brush it with oil and bake for 8 to 12 minutes, depending on the thickness of the steaks. Roast some cauliflower florets drizzled with olive oil for 15 minutes before adding the tuna steaks to the pan, et voilá… dinner is served. 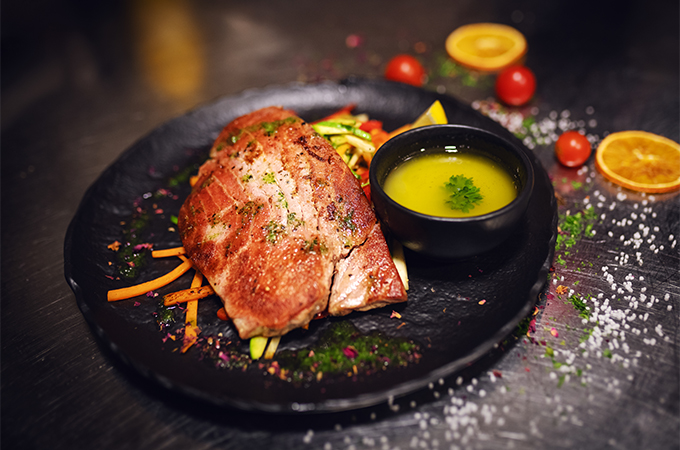 I’ve created two recipes to help introduce you to the wonderful world of tuna. The first is a poke (po-Kay) bowl, a Hawaiian dish of raw fish dressed in soy and sesame oil, served over rice with vegetable accompaniments. I used plain white rice in this version, but feel free to substitute brown rice, rice blends, farro, barley or quinoa. The same goes for the vegetables as many raw or roasted vegetables would be a nice addition. Keep the fresh cucumber, avocado and carrots no matter what as they add an irresistible freshness and crunch. 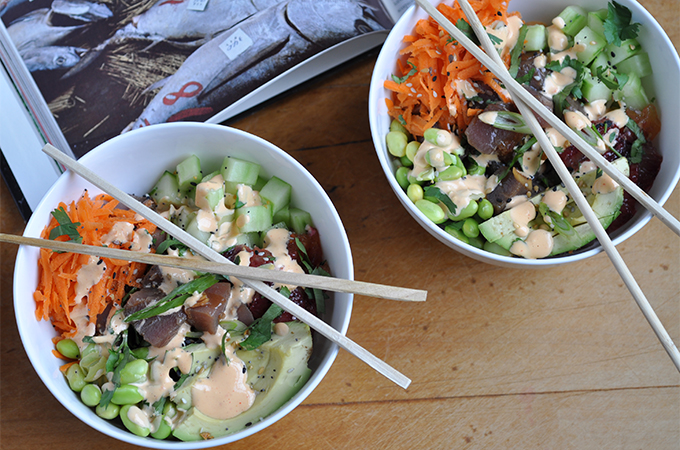 The next recipe is a tuna burger that our family has been eating for over 20 years. My kids are still crazy about it and when it’s on the menu they all head home. Fresh or frozen tuna is finely chopped and mixed with celery, red pepper, egg, bread crumbs, lemon and a little garlic and gently shaped into patties, coated with more bread crumbs and lightly fried to brown perfection. I serve these on toasted buns slathered with spicy wasabi mayo, avocado and an easy jarred mango salsa or a quick cucumber pickle that pickles up in minutes. 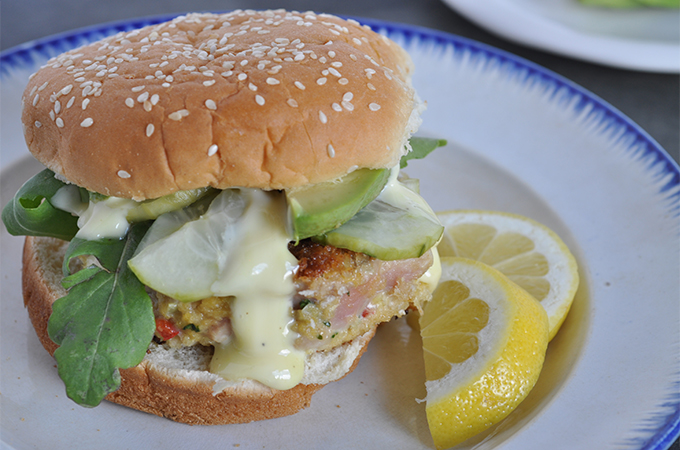 Fresh tuna is an indulgence within anyone’s budget and spring is the perfect time to become familiar with this versatile fish. Fast and fresh, these simple recipes will be sure to leave your taste buds begging for more.