Stemilt’s story is similar to Heinen’s, and just like us, family and quality continue to be at the center of their operations. 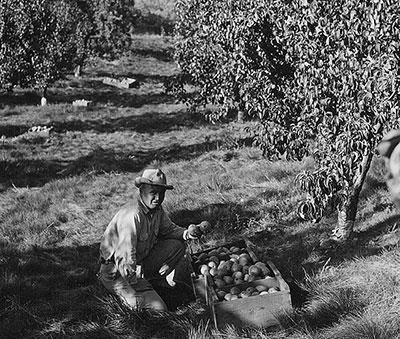 Telling their lengthy story concisely is difficult, but I’ll do my best. In 1893, the first generation of Mathisons homesteaded 160 acres on Stemilt Hill near Wenatchee, WA, and by 1914 the family had planted its first 10 acres of apples, pears and cherries.

In 1947, Tom Mathison returned home from serving in WWII to take over the family farm after his father died in a tragic accident. Tom was just 21 years old.

By 1958, Tom found himself at a crossroads. A disastrous cherry crop returned a mere $88, and Tom wasn’t going to be able to pay his loans to the bank. His wife laid it out clearly for him: “Either figure out what is wrong and fix it, or go get a factory job to support this family!”

The next year Tom followed his cherries by railcar to New York City. One look at the fruit told him exactly what the problem was. The cherries looked great when they left his farms but lost all shine, firmness and flavor by the time they arrived at the markets.

Tom knew what he had to do – take control of the quality of his fruit. He started harvesting cherries in the early morning hours and focused on keeping a tight cold chain from farm to market so that the fruit would arrive in great shape at its final destination. Tom’s hard work paid off and in 1964, he constructed a packing facility and founded Stemilt Growers. 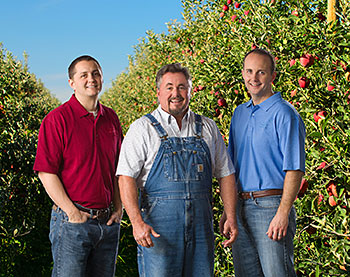 Today, the leadership at Stemilt has changed, but their mission, passion for quality and family values has not. Tom’s son Kyle farms cherries in Chile, California and Washington, while his grandsons West and Tate serve as Stemilt president and sales team leader.

The Mathisons know that quality must come first and foremost. They continually raise the bar on fruit quality with new varieties, innovative packaging and focusing on producing flavor-first fruit each and every day. Third generation farmer Kyle Mathison says it best: “If it comes from Stemilt, it has to be World Famous.”

The New Year has brought a new family partner for Heinen’s produce and we couldn’t be more excited. Be sure to pick up a bag of Stemilt’s Lil Snappers kid-sized apples to fill your child’s lunch with healthy apples sized just for them. And definitely check out Stemilt’s signature apple variety, Piñata. It’s a cross between American classic Golden Delicious and two heirloom varieties from Europe, Cox’s Orange Pippin and Duchess of Oldenburg. The result is crisp and juicy apple with classic flavors and a tropical twist. It’s a true surprise for the taste buds that I think you’ll love!