You might think the bakers at the Mama Jo Homestyle Pies bakery in Amherst, Ohio would be packing on the pounds. After all, the pies are a long-time favorite at Heinen’s because of how irresistible they are. Being surrounded by them seems like a one-way ticket to overindulgence. But Johanna Mann (AKA Mama Jo herself) insists they actually lose weight. Because with anywhere from 500–1,500 pies fresh baked each day (and a whopping 24,000 during the holidays) her bakers are kept busy. Really busy.

As Johanna puts it, the old saying about pie just isn’t true: “It’s not as easy as pie. Pie is hard!” Beyond the physical demands of making so many confections, many factors go into ensuring the pies are just right. For example, each year’s wheat crop is a little different depending on the location where it was grown and the weather during the growing season. This requires tweaks to the baking process. The temperature outside can also affect baking, meaning the bakers have to be able to think on their toes and make adjustments as necessary.

Johanna herself certainly knows a thing or two about adjusting. A family affair from the beginning, she started the business with her brother in 1993. Her husband (now retired) stepped in to help out after her brother moved on from the bakery, and their two children Ken and Jenna, who are poised to continue the family business after Mama Jo retires. The one constant at Mama Jo’s is the use of traditional recipes and techniques for the best pies possible. 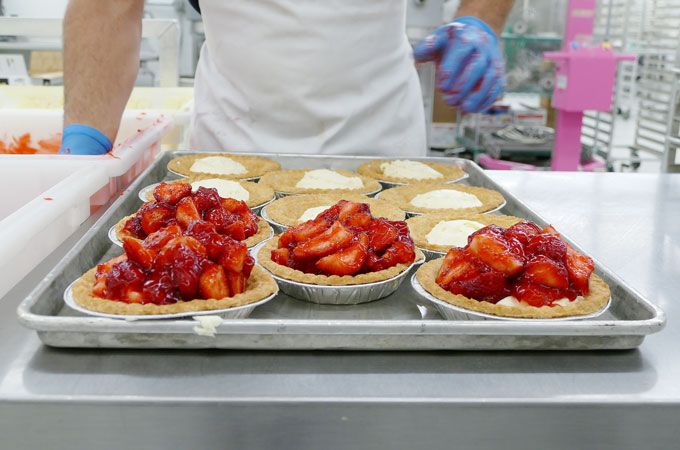 The bakery relocated from Vermilion to its current location in 1998, and it’s hard to imagine the building was once a Kmart. A cute retail area greets you in the front (there’s a second retail location in Medina), but it’s behind the shop in the bakery where the real magic happens. Each day at 4 a.m., bakers arrive to make the pie dough — 700 lbs per batch! A machine presses the dough perfectly into pie pans to create the crust, and they’re then baked in an enormous rotary oven with shelves revolving around a central location, sort of like a Ferris wheel for pies.

After they’re removed from the oven, the pie shells are then cooled by a group of industrial fans before moving on to their delicious destinies as everything from Banana Cream pie (made with fresh banana slices), Strawberry Cream Cheese pie (with strawberries and scoops of cream cheese), and Chocolate Cream pie (filled with fresh made chocolate pudding.) A bright pink mixer dubbed “Pinky” mixes up 45 lbs of whipped cream — enough for 100 pies. Lemon Meringue (one of Mama Jo’s favorites) is topped with handmade meringue and tucked back in the oven for a few minutes to brown the top.

Are you hungry yet? We hope so, because we’re satisfying your sweet tooth with a different flavor of Mama Jo pies featured each week through the month of May. Heinen’s carries Mama Jo pies in 6- and 8-inch sizes and a variety of flavors depending on seasonality.  Because the pies are made with no preservatives and fresh ingredients, we recommend eating them within a few days. (Tip: they freeze well.) 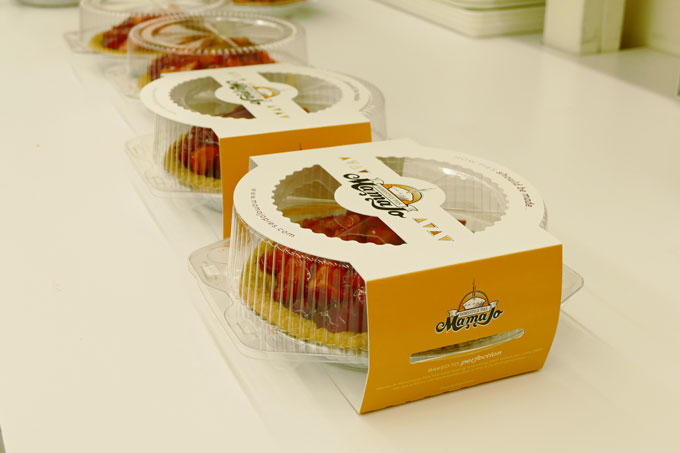 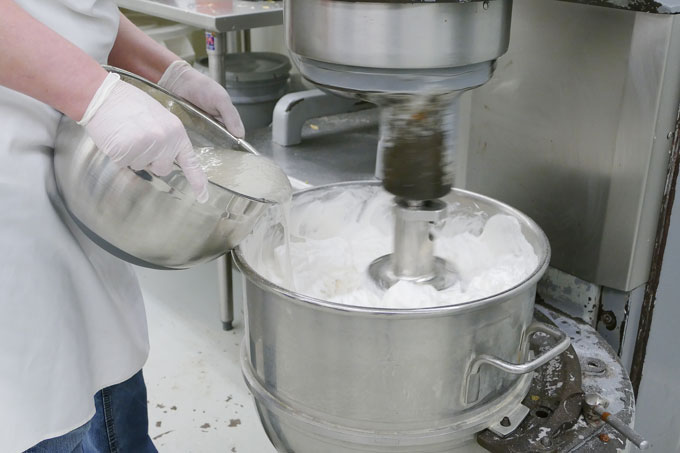 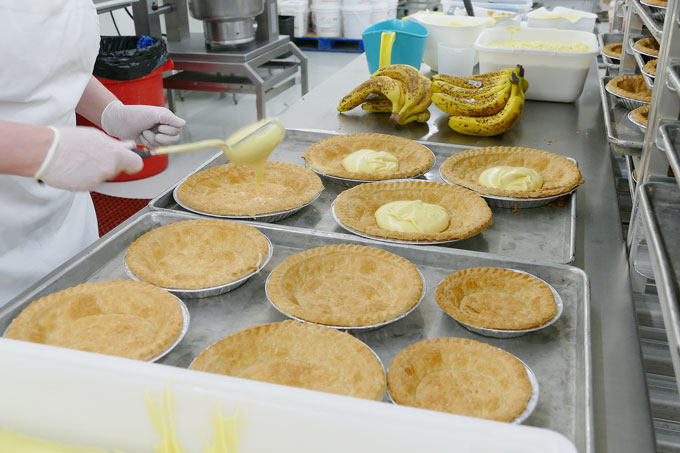 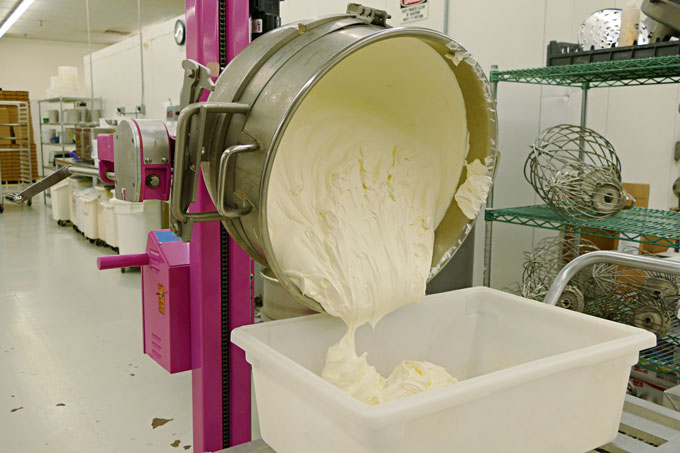 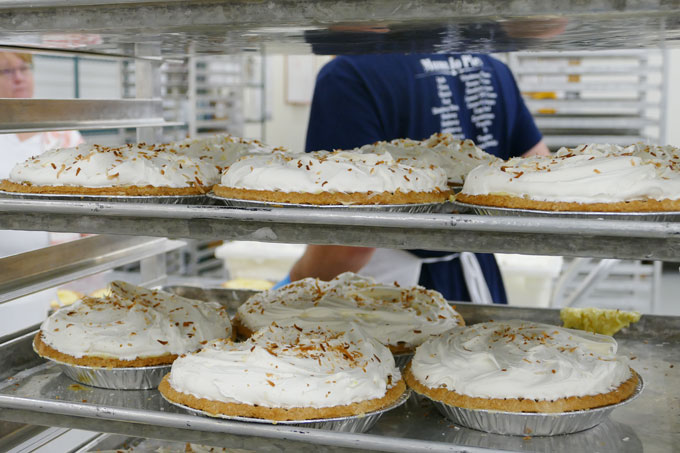 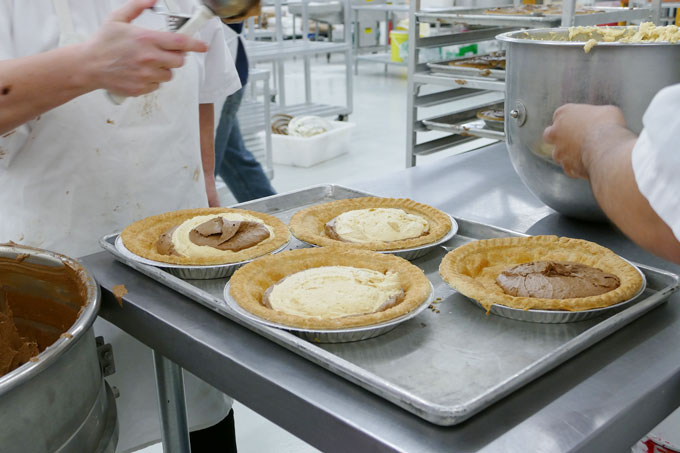 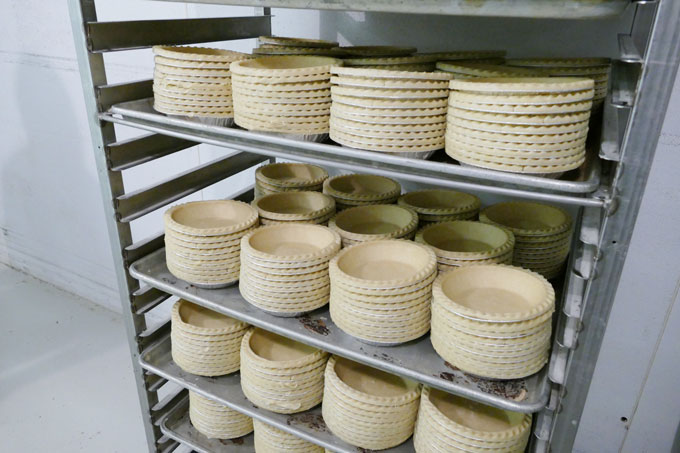 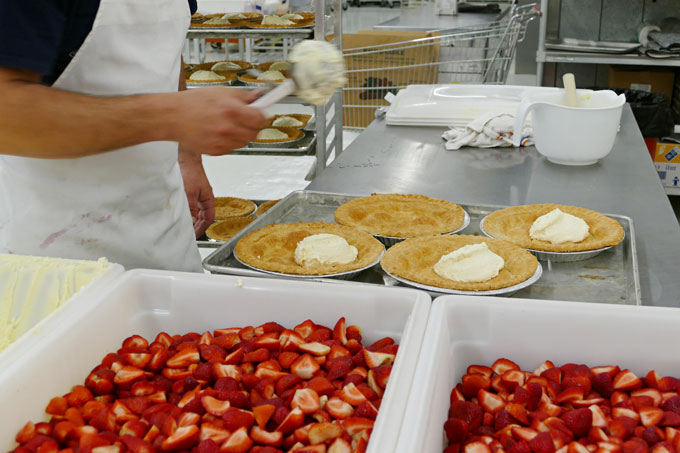 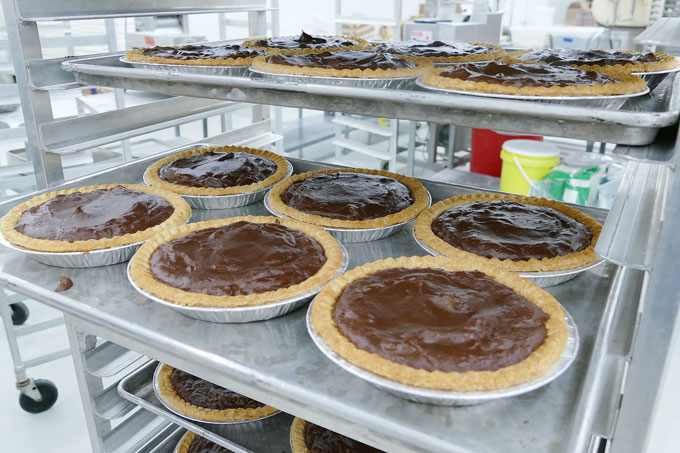 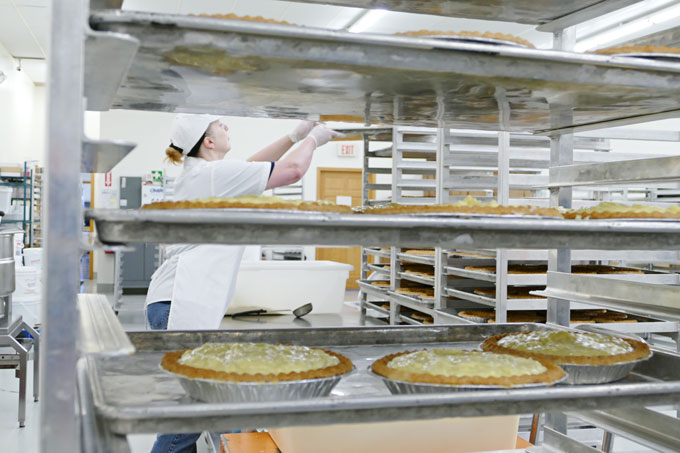