Many years ago my Mom added a New Orleans gumbo to the daily lunch menu in her restaurant. Since then it’s been a popular dish that people line up for.  She gave me the recipe years ago but honestly, (true confession) I’ve never made it.  This week I decided to give it a try.  Mardi Gras is right around the corner and this is the perfect dish for the celebration. Her recipe includes chicken but does not include shrimp. Of course, I had to change it up just a bit.  I wanted to add shrimp and I lightened the seasonings a bit for my gang that like things on the mild side.

I was curious about what the difference was between étouffée and gumbo.  What I found was that gumbo is a mix of vegetables and meat or shellfish with thickened stock. It’s traditionally served as a soup alongside rice that’s cooked separately. Unlike gumbo, which is considered a soup because of its thinner consistency, Étouffée is a main course made of one type of shellfish (crawfish or shrimp, for instance) that has been smothered in a thick sauce and sometimes served ladled over rice. 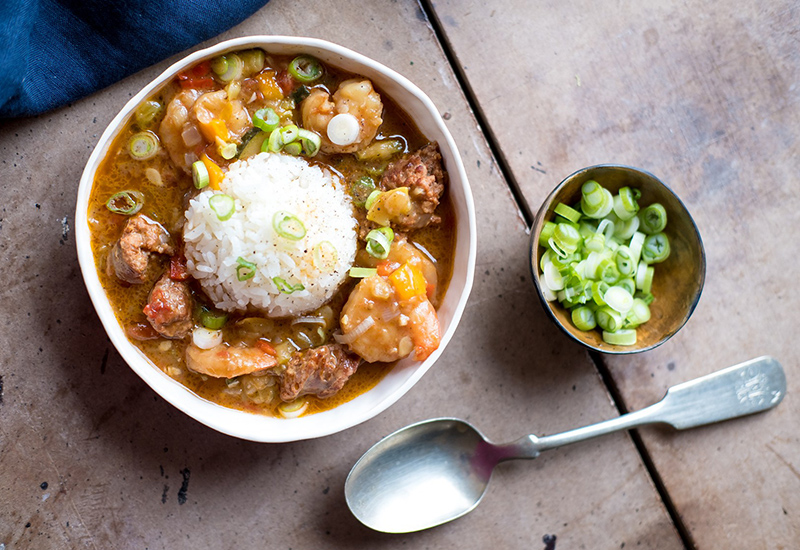 What makes the broth that binds gumbo so special is the roux it is started with.  What is a roux? It’s basically the heart and soul of every gumbo recipe. It’s a simple combination of oil and all-purpose flour that is slowly browned to perfection to get that nice, deep, and rich flavor that gumbo is known for. In this case, we’re using equal parts of each. For the best results, I suggest using a high heat oil. You can use corn, canola, or vegetable. I don’t suggest using olive, avocado, coconut, or any other oil that has a low smoke point. You need something that can really withstand the heat and the longer cooking time.

Here’s a little tip about making roux:  Roux requires extra special love and care and so I really suggest using a dutch oven or a heavy bottom pot. A pot that’s pretty thin, such as a stockpot, is not a good option for this recipe as the pot tends to get super hot and would then burn the roux. You could actually make the roux in a cast-iron skillet then carefully pour it all into a stockpot and continue from there.  Roux is not a dish easily made by cooks with a short attention span.  It requires continuous stirring.  I know, I’m asking a lot here!  You have to be ready to commit a total of 15-25 minutes of constant stirring and constant attention.  No multitasking!  Make sure all your veggies are chopped and your little ones are occupied BEFORE you start your roux.  Trust me, you don’t want a burnt, smelly pot of caked-on flour to clean because you walked away.  If it burns, dump it and start over.  You can’t fix burnt roux. The prize for your effort will be a rich depth of flavor that rocks your gumbo.  I find the stirring process to be quite zen.

This meal is packed with whole ingredients you’ll feel good about feeding your family. You’ll easily find everything you need at Heinen’s.  If you don’t feel like putting in the time to chop or your knife skills are sketchy you can buy most of the ingredients already chopped and ready to use. 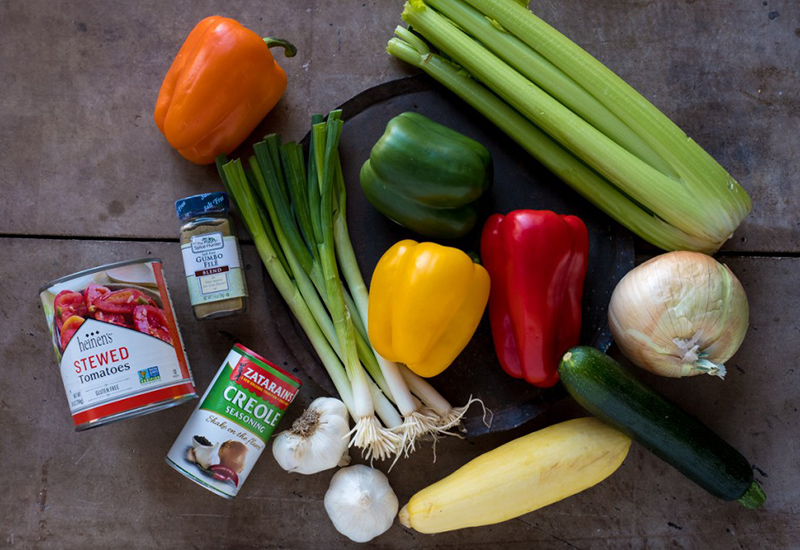 Once you’ve added all your chopped ingredients to your roux your house will start to smell fantastic.  Look at all the quality nutrients going into this dish.

Now that I’ve stressed the importance of no daydreaming while making roux, let me tell you what to look for.  Are you still with me?

The timing may vary 1-2 minutes but this is a guideline to help you make sure you’re on the right track. If at any point your roux is browning too much/too little, adjust the heat slightly to help it get back on track.

Stages of Roux
The blond roux: This is the most basic type of roux that we make. It’s what you make when preparing a béchamel sauce and it’s also what we use to make my mac and cheese. The roux is nice and light and usually requires just a quick 30 seconds – 1 minute of browning the flour.

5 minute roux: This reminds me of the color of hummus. It’ll be a little deeper than the blond roux but we need to keep going. Keep in mind, as we cook the roux, it is losing its thickening power, so the darker the roux, the less it will thicken your gumbo.

10 minute roux: Color of almond butter. It’s lighter than peanut butter but on its way there. You’ll notice that it smells a little like popcorn or similar to when you brown butter, it has a nice nutty smell.

15-22 minute roux: The color of homemade peanut butter. It’s dark and nutty with a medium brown tone. I stopped my roux here at 20 minutes.  If you’re new to gumbo making, I suggest leaving it at this stage! It will thicken the dish just enough and the flavor will be well pronounced without overpowering.

25+ minute roux: Red-brown in color and is darker than peanut butter. You can take the roux a little further to what is considered a black roux (about 32-40 minutes), which is about the color of dark chocolate. But keep in mind that this will change the overall taste of dish and will leave it much a thinner soup. 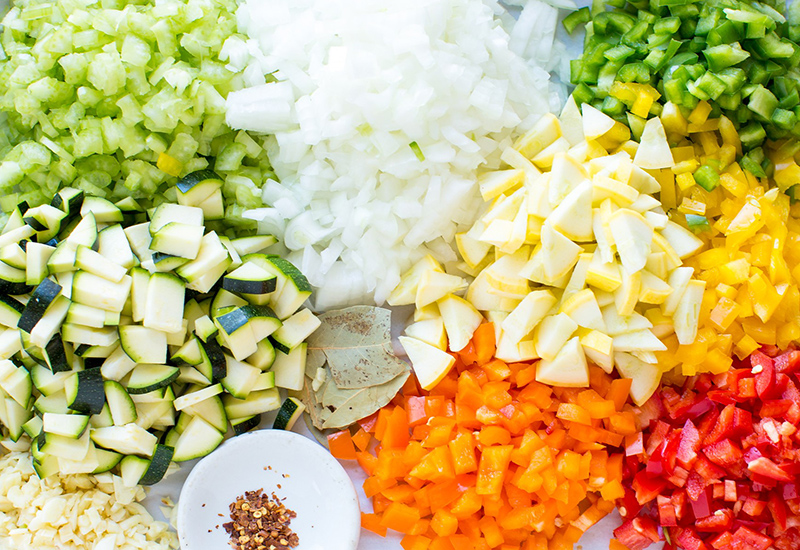 *Note: I browned the sausage link in a sautéed pan just to give the exterior a bit of color, then chopped it into bite-sized pieces before adding it to the gumbo to continue to cook. 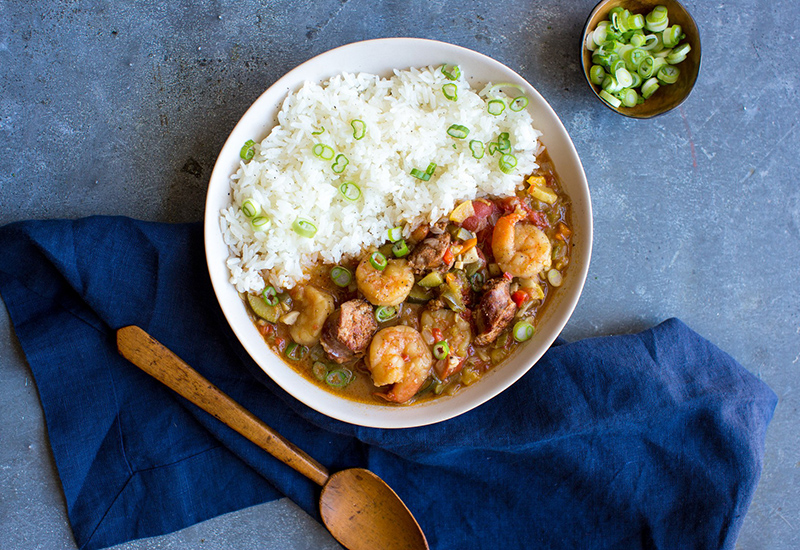 Click Here to Print the Recipe for Mardi Gras Gumbo with Shrimp + Sausage.