The following recipe and photography was provided by recipe developer and food photographer, Ashley Durand of Plate & Pen.

It’s no secret that I’m a big fan of wine. I love to cook with it and drink it. I had the chance to sample a group of wines from South America, currently sold at Heinen’s, and they are delicious. In case you’re unfamiliar, I’ll give you the rundown on these South American selections.

Argentina is the fifth-largest wine-producing country in the world. In fact, Mendoza, the epicenter of Argentine vino and the most highly-elevated grape growing region in the world, makes over 70% of the country’s wine.

Argentina got its start in the wine world in 1557 with the help of Chilean and Spanish missionaries. Enologists focused on Malbec (brought from France’s Cahors region), Torrontés (an aromatic white grape originating from the malvasia grape family) and Bonarda (also known as Charbono or Douce Noir, originating in Savoie, France).

In the 1980’s, the focus of Argentine winemaking shifted from quantity to quality and export. Today, there are many additional wine varieties that have found success in Argentina including Cabernet Sauvignon, Merlot, Chardonnay and even Pinot Noir, thanks to cooler southern regions like Patagonia.

Once I tasted these wines, I knew that the white Santa Julia Torrontes would be ideal as a marinade for bay scallops; however any of of these wines can be paired with the ceviche I’m sharing below! They all balance out the spiciness and acidity of the scallops and marinade. Personally, I like the Cab Franc the best! 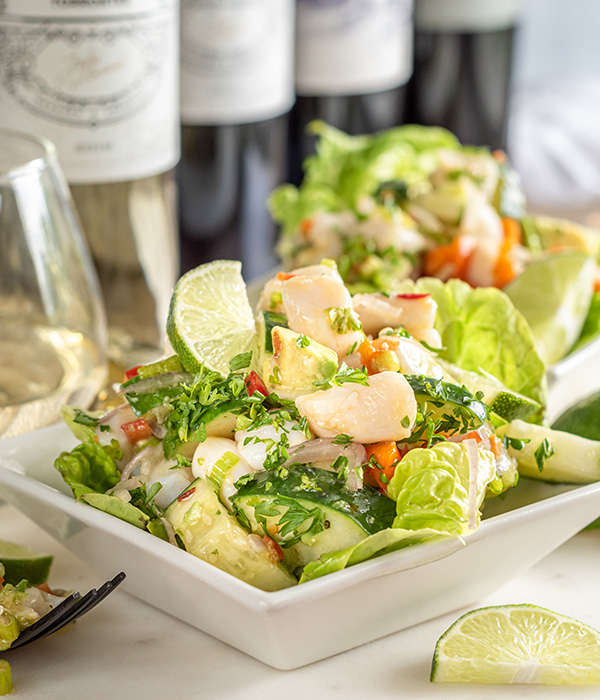