The following recipe and photography is courtesy of Graham R. and his dog, Carl. For more of their delicious food ventures, visit them on Instagram @cookingwithcarrrl.

Boy, oh boy, do I have a “penne” for your thoughts! This Dump-and-Bake Penne alla Vodka recipe is sure to live rent-free in your head after the very first bite!

Penne alla Vodka is a classic dish featuring a sauce made of heavy cream, vodka and crushed tomatoes, but in this recipe, heavy cream is replaced with Heinen’s Alfredo sauce. If you’re an Alfredo fan, this sauce will not let you down. Made with real Parmesan and Romano, it tastes leaps and bounds better than any other canned Alfredo out there. It works wonders in this dish and adds a ton of flavor and creaminess!

I love this recipe for when I need to feed a crowd, or if I don’t feel like putting a ton of effort into dinner! Let’s face it, some days it’s better just to throw some ingredients in a dish and let the oven work its magic. Sometimes I add spinach or a handful of sundried tomatoes to switch up the flavors, but the recipe below is no fail!

The real shortcut in this dish is the use of chicken broth and uncooked penne noodles. When combined in a baking dish and placed in the oven, the noodles and sauce cook at the same time, so there’s no need to boil water or strain the noodles. That’s my kind of cheat meal! 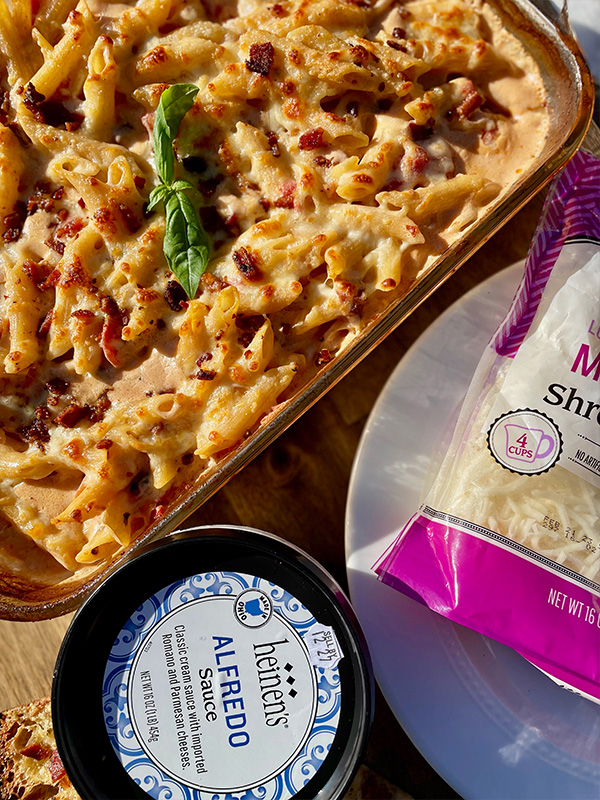