In my opinion, the most incredible soups are always homemade. If you’re under the impression that making a great tasting soup requires hours of time and effort, I’m here to tell you that it’s easier and more delicious than you think!

With so many fresh, seasonal veggies available in Heinen’s Produce Department, I felt inspired to whip up a roasted pepper soup. Shishito peppers are hot on people’s grocery shopping list nowadays, but as far as taste is concerned, these bite-size peppers are mostly sweet with little heat.

It’s very easy to roast shishito peppers at home, and I have two super simple methods to share with you! The first is more traditional. Simply tuck the peppers in a foil packet and roast in the oven. Take a couple sheets of tin foil and roll the sides to form a little pocket for the peppers. Place the peppers in the foil pocket and pour about a cup of olive oil over top. I love using Filippo Berio olive oil for its rich taste. Close up the sides of the foil pocket, sealing the peppers inside, and place in a 400˚F oven for 35-40 minutes until they start to char and blister.

The second method is less traditional, but still super simple. Set an air fryer to “roast” and preheat it at 400˚F for 2-3. Place the peppers in the roasting basket and pour about a cup of Filippo Berio olive oil over top. Roast in the air fryer for 8 minutes, flipping the peppers halfway through. This is the quicker method if you need this meal in a pinch.

I used the oven roasting method for this soup recipe because I had time to spare. While roasting the peppers, I also roasted a few other veggies for this soup in a cast-iron skillet that went into the oven, too! The nice thing about this method is that all of the veggies cook at the same pace!

When the peppers and veggies are done roasting, remove the stems from the peppers, slice all of the other veggies and add everything, along with the olive oil from the skillet and foil packets, to a blender or food processor. You’ll want to add some of the vegetable broth to the blender to help create a smooth texture.

Once blended into a smooth paste, add the spices and blend for another minute or two. Then, all that’s left to do is add the mixture to a soup pot, pour in the rest of the vegetable broth and two vegetable bouillon cubes and simmer for about 10-15 minutes.

Add the heated soup to a bowl, top with diced avocado, jalapenos and a drizzle of Greek yogurt cream and serve with a Heinen’s parmesan crisp. Enjoy!

For the Greek Yogurt Cream 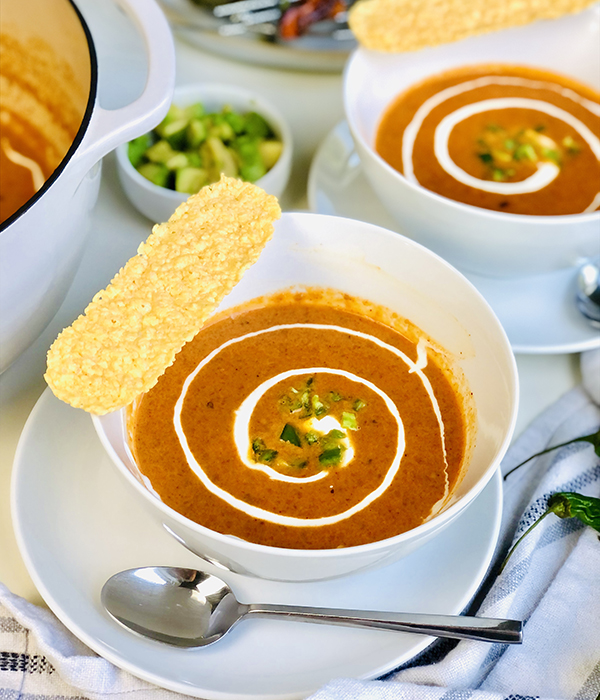