Most of the vegetables I make are roasted, slightly cooked or raw. I’m not one to put butter and cheesy sauces on vegetables mainly because I like the flavor of most vegetables. Cauliflower is an exception. I’ll eat it raw with some sort of dip or ground and made into a pizza crust but, over-all, it’s not my favorite choice from the garden. Until today.

Today I decided to try roasted cauliflower. When I looked for a recipe it seemed they were all similar in method but varied greatly in seasonings. I decided to experiment. My son Paul brought me some paprika from Budapest and I love to use it so I decided to started there. Then, I couldn’t find my paprika. So I opted to use a Moroccan spice I happened to have in my drawer. It’s called Ras El Hanout. The one I have is made by McCormick. Ras El Hanout is generally a combination of ginger, cardamon, mace, cinnamon, allspice, coriander, nutmeg, turmeric, black pepper, white pepper, cayenne, anise and cloves. It is common in Moroccan cooking. 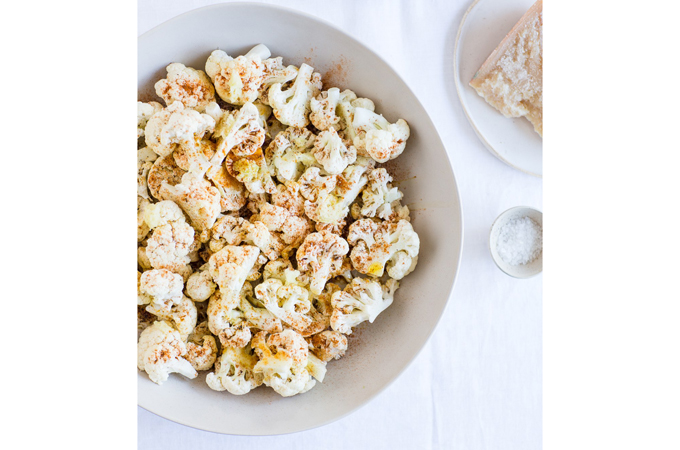 After I added the Moroccan spice, I found my paprika. So I added that too. The rest came together as described in the instructions.

I used foil lining on my sheet pan and I’m so glad I did. The little melted spill-off of parmesan cheese and seasonings made little crisps that were as tasty as the cauliflower itself.

The cauliflower didn’t make it to the dinner table. My kids came into the kitchen drawn by the smell and ate the whole batch, claiming to only be tasting them. The outside edges are toasty and crunchy while the inside is soft and creamy. I wouldn’t change a thing about the seasonings. It was fantastic. 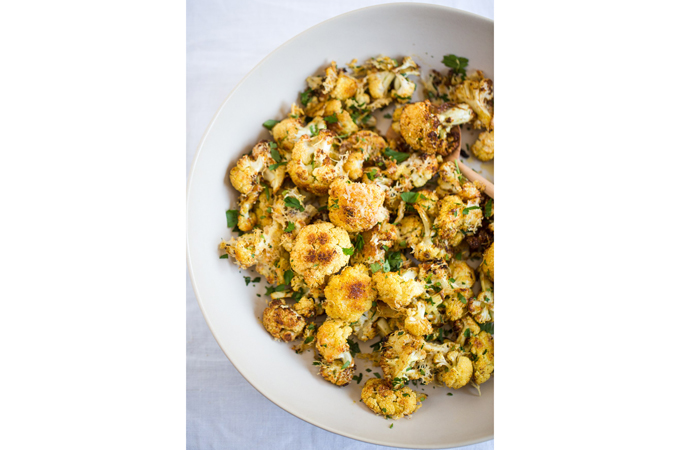